Home > News > Industry News > What is the Structure of the Multi-Effect Distilled Water Generator?

What is the Structure of the Multi-Effect Distilled Water Generator?

As a China Pharmaceutical Equipment Supplier, share with you.

The multi-effect distilled water generator realizes data collection and process control at the production site. The color touch screen can display, record, and alarm the instantaneous value of the tobacco leaf water extract production device such as temperature, liquid level, pressure, and extract concentration. The operator can adjust various control parameters through the friendly man-machine interface, and control the pump and valve. To proceed. It is mainly composed of evaporator, preheater, condenser and electric automatic control part. The multi-effect distilled water generator adopts the vertical tube falling film evaporation principle. In order to ensure the quality of distilled water, a special steam-water separation device is installed in the evaporator. The function of the separation device is to remove liquid droplets in the steam, thereby improving the purity of the water for injection. The device uses centrifugal force to throw the water foam to the outer wall, which is collected by the collecting plate and then discharged to realize the purpose of separating the water droplets in the pure steam. The evaporation column is more conducive to falling film evaporation due to its relative lengthening. 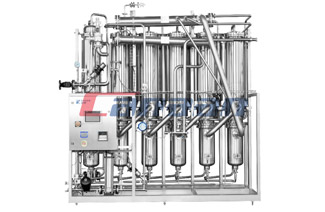 The collected steam forms a 180-turn direction and enters the lower section of the separation device for low-speed coarse separation. Under the action of centrifugal force, the large droplets in the steam-water mixture are thrown into the bottom of the column along the spiral plate. Inside, the gas flow rate is accelerated, and the high-speed centrifugal movement continues to remove water droplets and impurities. The steam reaches the top of the central part and enters the cyclone cavity through the rotary cutting entrance. The steam in the cavity forms a high-speed vortex, and because of its fast radial acceleration, water droplets and impurities are thrown to the outer edge of the cyclone cavity by strong centrifugal force and fall into the bottom of the column. According to the different structure of the multi-effect distilled water generator, it can be divided into three types: tube type, coil type and plate type. It is mainly composed of a tube heating chamber, a separation chamber, a cylindrical shell, a defoaming device, a condenser, a frame, a water pump, a control cabinet, etc. The water distiller uses steam as the heating source and deionized water as the raw material water.

Our company also has Multiple-Effect Water Still on sale, welcome to contact us.

hot Products
About Us
Products
Turnkey
News
Service
Contact Us